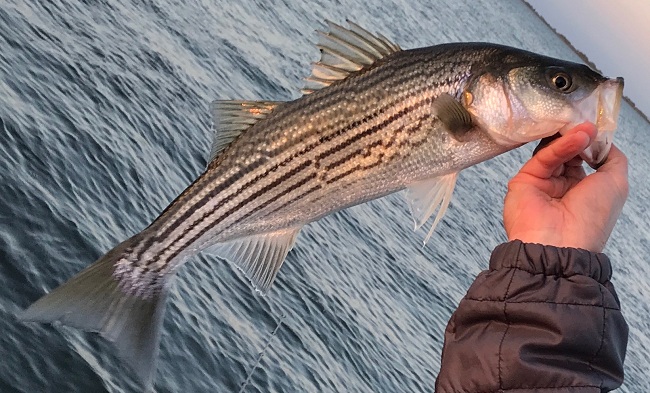 Myself and prostaffer Cory McBride recently spent the weekend on Lake Cumberland striper fishing with Captain Jim Durham and Captain Larry Ulmer of StriperFun guide service. As our luck would have it, we chose the exact date that the Corp of Engineers decided to open up the dam and start dropping the lake. Despite the setback, Larry and Jim were able to find the fish and we had a great time reeling in a mess of 24 to 28 inch fish. This was the first time that Cory and me had ever striper fished, so we were able to learn a lot and have a successful trip thanks to our guides. As always, we had the cameras rolling, and you’ll be able to see exactly how we did when the show airs sometime in August (we’ll keep you posted on the exact date).

StiperFun is based out of Lee’s Ford Marina, just outside of Somerset. The folks at Lee’s Ford put us up in a nice cabin and treated us to some first class eating at their restaurant, which was conveniently located just across the street from the cabin! If you’re interested in trying your hand at Striper fishing, or just want to spend a quiet weekend away at Lake Cumberland, contact the folks at Striper Fun and Lee’s Ford Marina and they will hook you up. Tell ‘em that Poor Boys sent you!